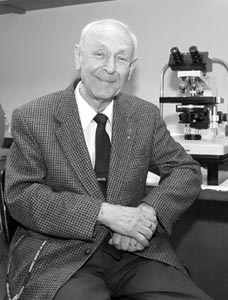 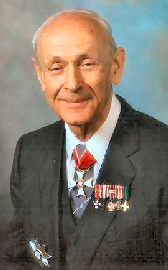 Professor Zbigniew (Bob) Kabata was born in Poland in 1924.

Bob is a distinguished scientist and international authority on the biology of the parasitic copepods of fish. As a parasitologist he is perhaps most famous for his outstanding original research papers and books describing the morphology, life history, and development of these marvellously intricate animals. He is widely acknowledged as the foremost world expert in the field of parasitic copepod biology and systematics. Indeed, as a testament to the huge impact he has had on the field internationally, a total of 20 parasitic taxa (mostly copepods, but also including helminths and Myxozoa) from 15 countries carry his name! Respect for his meticulous systematic work (as well as his command of Greek and Latin!) earned him a 15 year stint as a Commissioner on the International Commission on Zoological Nomenclature. In the view of many, his pivotal book “Parasitic Copepoda of British Fishes” represents a landmark publication in Parasitology. He is currently completing another book, one that will represent a fascinating and phenomenal synthesis of the biology of parasitic copepods and the complex interactions with the environment and their hosts.

His groundbreaking research interests cover both basic and applied problems in fisheries Parasitology. He is without a doubt, one of the world’s foremost fish parasitologists. Bob Kabata is famous in fisheries science as a pioneer in the use of parasites as biological tags, and for his ecosystem approach to managing fisheries. He was among the first to demonstrate that parasites could be valuable in identification and discrimination of commercially important marine fish stocks and in making vital fisheries management decisions.

He is indeed a parasitological giant, someone we should all be proud to have among our ranks. The full transcript of the award introduction is published in the December 2003 issue of the Journal of Parasitology.

Bobkabata kabatabobbus is a parasitic copepod. The original (type) specimen was collected from the flesh at the base of a fin of a pallid sculpin Cottunculus thomsoni caught in the Northwest Atlantic Ocean.