A member of a species likely new to science, the Osedax yellow-collared worm feasts on whale bones in 2008. Named for the thin yellow ring that runs around the base of the worm’s feathery structures–thought to be used for respiration–the species lives below 3,280 feet (1,000 meters). 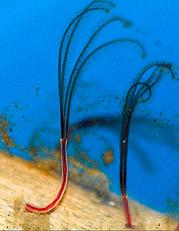 This lovely worm loves the whales but after the death.

So far,the scientists have confirmed 5 species of Osedax   but in November researchers from the Monterey Bay Aquarium Research Institute revealed evidence of 12 more potentially new species, including the yellow-collar, all found in the undersea canyon off Monterey, California.