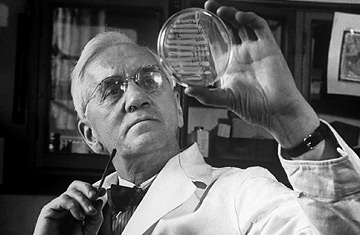 Sir Alexander Fleming(6.August.1881 Lochfield Farm, Darvel, Ayrshire, Scotland- 11.March.1955 London)-Scottish bacteriologist- is best known for his discovery of penicillin. Fleming had a genius for technical ingenuity and original observation. His work on wound infection and lysozyme, an antibacterial enzyme found in tears and saliva, guaranteed him a place in the history of bacteriology.

But it was his discovery of penicillin in 1928, which started the antibiotic revolution, that sealed his lasting reputation. Fleming was recognized for this achievement in 1945, when he received the Nobel prize for Physiology or Medicine, along with Australian pathologist Howard Walter Florey and British biochemist Ernst Boris Chain, both of whom isolated and purified penicillin .(ref: Britannica Encyclopedia)